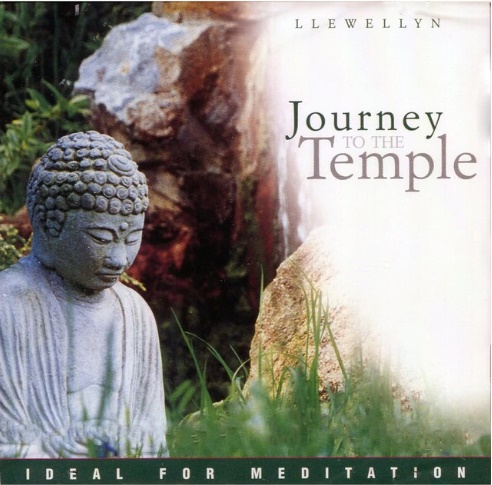 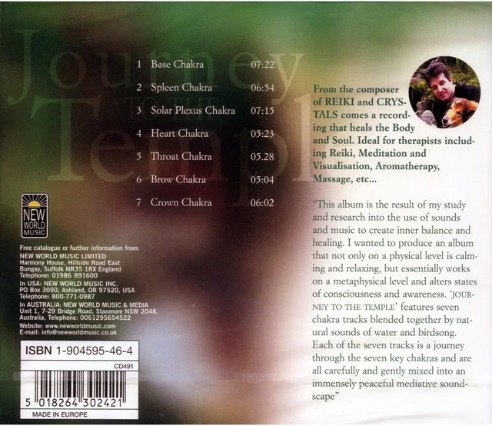 CD Journey to the Temple

From the composer of Reiki and Crystals comes a recording that heals the Body and Soul. Ideal for therapists including Reiki, Meditation and Visualisation, Aromatherapy, Massage, etc…

‘This album is the result of my study and research into the use of sounds and music to create inner balance and healing. We are all individually influenced by sound and certain tones can and do affect our chakras.

I wanted to produce an album that not only on a physical level is calming and relaxing, but essentially works on a metaphysical level and alters states of consciousness and awareness. In 1982, David Naegele produced Temple in the Forest which became one of my favourite recordings and a popular choice for therapists. Like David, working with the sound of the forest birds and a gentle flowing stream, I combined the ‘temple bell’ sound with the ‘Ohm’ vibration. I then took certain instruments and tones and carefully arranged them to balance a particular chakra flow of energy.

The result is that Journey to the Temple features seven chakra tracks blended together by natural sounds of water and birdsong. Each of the seven tracks is a journey through the seven key chakras. On this special album you will hear a wealth of instruments and sounds (temple bells, chimes, piano, strings, flutes, harps, wind chimes) all carefully and gently mixed into an immensely peaceful meditative soundscape.’Llewellyn

There are no reviews yet.

Only logged in customers who have purchased this product may leave a review.

We use cookies on our website to give you the most relevant experience by remembering your preferences and repeat visits. By clicking “Accept”, you consent to the use of ALL the cookies.
Cookie settingsPrivacy PolicyAccept
Manage consent

This website uses cookies to improve your experience while you navigate through the website. Out of these, the cookies that are categorized as necessary are stored on your browser as they are essential for the working of basic functionalities of the website. We also use third-party cookies that help us analyze and understand how you use this website. These cookies will be stored in your browser only with your consent. You also have the option to opt-out of these cookies. But opting out of some of these cookies may affect your browsing experience.
Necessary Always Enabled

Any cookies that may not be particularly necessary for the website to function and is used specifically to collect user personal data via analytics, ads, other embedded contents are termed as non-necessary cookies. It is mandatory to procure user consent prior to running these cookies on your website.

SAVE & ACCEPT
Add to cart